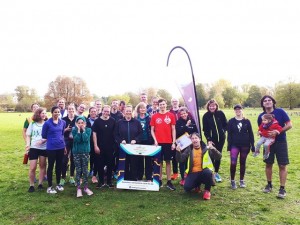 Tweet
Visitors from England, Wales and Scotland at Volksgarten parkrun...Hello and welcome to this tourist run report. Quick thank yous are in order:
Firstly our Volunteers. Without our super hi-viz heros, parkrun simply would not take place. No job is too difficult and training shall be provided on each position beforehand. Get in touch at volksgarten@parkrun.com and join a team of high Vis heroes!
We also welcome seven first timers today - Congratulations! We hope you enjoyed your first time with your new found parkrun family, and look forward to you returning soon. 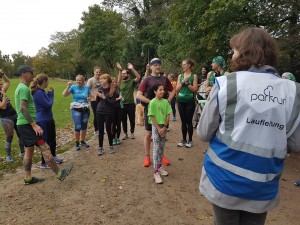 Volksgarten parkrun number #26 found a total of thirty runners enjoying the indifferent weather this morning.  It never rains at parkrun, as our parkrun ambassador in Fife frequently states.
And today was no exception. The parkrun fairies kept true to the their word and the rain stayed away. Just enough time for parkrun to close down before the heavens opened. 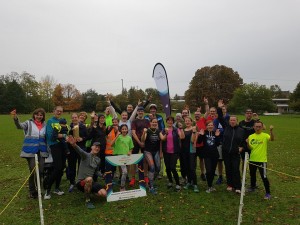 So what advice may i offer any potential tourists? Volksgarten is nearly pancake flat, so perfect PB territory. The course is a double loop, and picturesque views during  your time at Volksgarten.
Next week the team have a special treat for you . . . . . . The route is reversed!
Many thanks to this weeks  Hi-viz heros at Volksgarten: Jasmin BISCHOFF , Peter KELLY , Birgit KRAFT , Rebecca ROES , Peter RUTHERFORD , Lars SCHMIDT , Norry SMITH , H. THIER , Christiane TODT-HOEHNDORF , Nora WILL , Alun WILLIAMS
Why not join in and help ? Drop the team a e-mail at volksgarten@parkrun.com 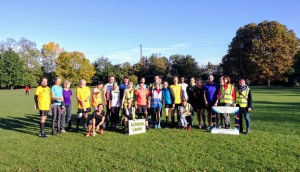 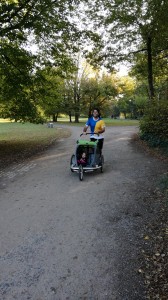 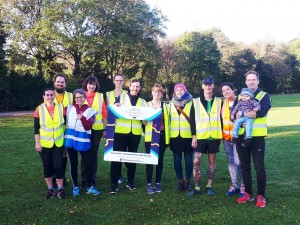 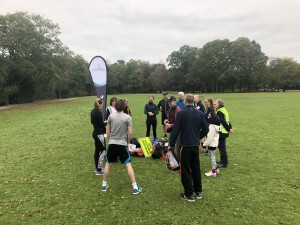 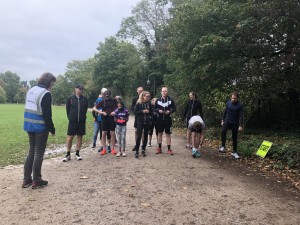 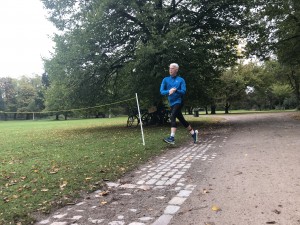 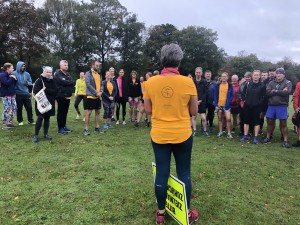 What a fantastic morning and what a fantastic experience. The parkrun fairy magic was in action as the weather was made ideal for running as all rain was cancelled and the temperature was cool. An excellent start. The volunteer team had been out early setting up one of the slightly more complex courses I have come across and were ready to greet the arrivals. This first special event happened on the day Germany celebrated 30 years of re-unification and offered the opportunity for people to squeeze in an extra parkrun. Records would tumble today but not before Rebecca Roes had delivered a fantastic briefing to the first timers and taught us the phrase #LIEBEparkrun. Rebecca was also celebrating her 100th run and there was an abundance of cake as well as balloons and candles and many photographs were taken before during and after the event. Thank you for that welcome. 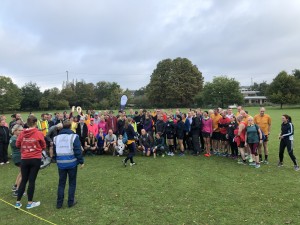 The largest crowd to descend on Volksgarten also had the biggest number of helpers. Today the run director was Chris and he had journeyed from his own event in Koln to assist and to deliver the briefing. This was well delivered and very well received.

Volksgarten turned into a global village today with visitors from across Europe coming together to celebrate the day and join in the spirit of parkrun by walking, jogging, running or volunteering. It was a fabulous atmosphere and there was time to chat with parkrunners such as Kurt from Faelledparkrun in Denmark, some older juniors, Mathew and Paul from Basingstoke, Ian and Eve from Macclesfield, the Alices: Noyes and Edwards, Deb and Paul from Thornbury, to name but a few. People had come from as far apart as Scotland and Scandinavia, Holland and Australia to be here today and all were made very welcome indeed. 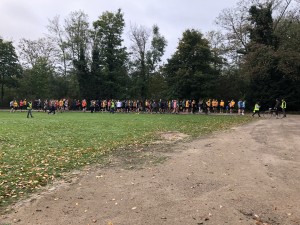 Walk to the start

We had met some fellow parkrunners at breakfast so we set out on our journey together and that got off to a bad start. I did not have the correct value of note for the ticket machine but Stuart McTeer from Dartford stepped in and gave me a small enough note to cover the fares thus saving my parkrun day. At the park I met up with a posse we had partied with the previous evening and some looked as though they might have some fun getting around. There was a general buzz of excitement as we settled into the briefing and recognised the achievements of some more milestone runners: Jon Williams of Avon Valley Runners joined Rebecca in the 100 club and Trevor Birkby of  Parkside Panthers can now claim his red 50 t-shirt. Andrew Molloy kept it quiet that he was celebrating 300 runs today but he was spotted.

Of the 128 people who ran, jogged or walked the course, there were at least 104 first timers and at least 5 brand new parkrunners. At the briefing just one person owned up to being new to parkrun but in face there were at least four others. We say welcome to the family to Dominic, Sarah and Jacob Baron, to Natalie Ketterer and to Anne Sophie Eberhardt and hope you will join us again quite soon. On this momentous occasion five people had forgotten their barcode #NBNTNE

Among the returning runners 10 recorded a new PB. Well done to:  Alex Dillge,  Charlotte Pardey, Damian Baker, Jane McCullim, Julius Itta, Michael Kilimann, Paul Wain, Syesha Kilimann,  Vesna Langen, and to Wolfgang Klein.  There were representatives of 51 different clubs who took part and some interesting names in there including parkrun World Tourists, Good Gym and the Tight Pants Club. The power of parkrun bringing all sorts of people together. 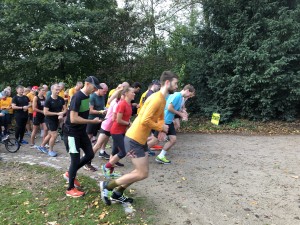 Now to the course. We were shepherded to the start and set off. This was a record number of runners, nearly three times the previous highest but the course was more than able to cope. A mixture of tarmac and hard trail, generally flat, it offered the opportunity for a brisk run if that is what you wanted. It's a very scenic route, through tree lined paths, meandering, twisting and turning, offering diverse sights such as the River Dussel and some sculptures. The course is not marshalled but there are cones at the many key places where there might be an opportunity to go wrong. I set off  at a reasonable pace and for the first lap concentrated on the route rather than looking for my time. I was soon overtaken by a buggy which II never saw again until the end, where father and child were re-united with pregnant mum who came in not too far behind! It takes all sorts. I was really enjoying the run and although there are a few tight turns it did not slow me down too much. Passing through the start line again we were greeted with enthusiastic applause and a camera capturing our finest moments. I look forward to seeing the evidence. The course was mainly dry, despite the recent rains and so conditions underfoot were quite good. I settled in and enjoyed the second lap but all to quickly it came to an end. The volunteer team quickly and efficiently coped with a bigger than usual funnel releasing us onto a table full of cake. I run for cake. These were great cakes, especially the apple strudel. As usual, peole stayed around, cheered in fellow parkrunners and took lots of photographs. New bonds were made and then it was of to the cafe for more cake and catch up. I had the opportunity to repay Stuart's kindness before we set off back to our hotel. 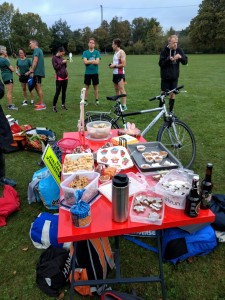 Everyone who has attended Volksgarten is still in the fastest 500 hall of fame and today there were also 13 new age category records. See where you stand by looking at today's full results and a complete event history on the Volksgarten parkrun Results Page.

Every parkrun depends on the support of volunteers and helping is a fantastic way to make friends, feel good and have fun. This week's event was made possible by 18 volunteers: 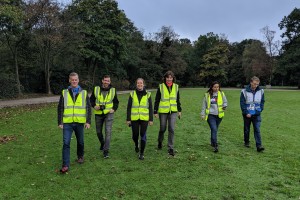 Thank you Germany for having your special day today and thank you Volksgarten parkrun for making so many of us so very welcome. It was a fantastic experience and one which I shall treasure. I wish you every success in the future and many more runners to enjoy the experience of your fabulous team and fantastic course. 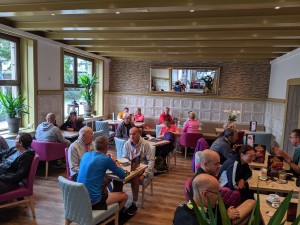