This run report comes from Simon, parkrun tourist from Manchester.

Last week’s report (for 17 August) was written by Sue Martin, a good friend of mine. Sadly, I have to advise that this report will not be as entertaining or as informative as Sue’s. And I write this with a sense of guilt, as I feel I should be writing it in German but that would take me a lot longer and I do have a sort of deadline to submit this report (i.e. before the next run!).

I love visiting different parkruns and, having done one in France and one in Ireland and have one planned in Sweden next month, I really wanted to do one in Germany. Why Düsseldorf? Not that I needed a V, having done two already. After Ryanair announced strikes for Friday 23 August, my convenient options were reduced to Hamburg or Düsseldorf and the more favourable flight times meant that the latter got the vote.

As for the run itself, a big thanks as ever to the two Peters, Nora, Lars, Heike, Jasmin, Alex and Christiane (the hi-viz hero volunteers) who put the run on for us. We are very fortunate that these people give up their time and the chance to run to allow others to run. Please give these people support in future by helping with the various tasks so that Volksgarten parkrun can thrive and that they can themselves run.

There were 28 runners on Saturday, including one unknown. 17 runners had run there previously and, of the 10 first time visitors, one did his very first parkrun. Welcome Thomas Schindler! First time visitors included runners from South Africa and from Blackburn, Southampton and West Midlands in England. 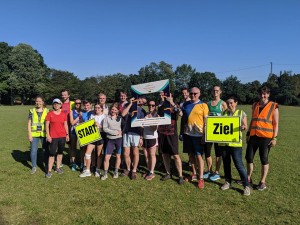 I was introduced to parkrun in January 2012 and it soon became addictive! My other passion is football and my visit to Dusseldorf fortunately coincided with a home game for the city’s football team, Fortuna, against Bayer 04 Leverkusen in the Bundesliga. I was pleased to get a ticket for the game on Saturday afternoon. Not the best afternoon for Fortuna as they suffered a 3-1 home defeat but getting to the game was a bonus for me. parkrun and football, the ideal weekend trip away! (For me anyway!).

We didn’t realise it at the time, but our journey to Volksgarten parkrun started in June 2018 at Innsbruck airport. Unfortunately, our plane home from there was unable to land so we had a 17.5 hour delay - extremely tedious to say the least!

However, we did receive some compensation: vouchers for another flight.  We just needed to decide where to go.  We decided it needed to be somewhere over the sea, otherwise we could just drive there, and of course, it needed to have a parkrun! After comparing flight timetables with parkrun locations we decided on Düsseldorf and Volksgarten, which we were especially pleased with as we didn’t yet have a V in our parkrun alphabet.

As big fans of the British television programme "Auf Weidersehen Pet," largely set in Düsseldorf, we were hoping to be able to visit some of the locations. However, we subsequently discovered that it was mainly filmed in Hamburg and Elstree Studios near London – Oh well, you can’t win them all!

Our visit to Volksgarten parkrun more than made up for it though. 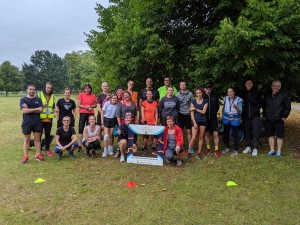 I like to find out a bit about where I am visiting – This is mainly from the internet, so it must be true! Volksgarten is one of the three sections of Südpark, which is the biggest park in Düsseldorf.  The city purchased 11 hectares of land in 1892 to create the Volksgarten which is the oldest part of the parks, completed in 1896, and which was planned to be open and natural looking.  It was initially intended as a recreation area for the workers of the nearby steel works, and translating as “people’s park” it seems fitting that it is now the venue for a parkrun.

The weather forecast for Saturday had changed throughout the preceding week, but we woke on Saturday to a forecast of it being dry all day.  However, I do find that looking out of the window is a better guide to the weather...and it was raining!  It rained with varying intensities as we went to Volksgarten, chatted with other parkrunners and did the run, but our spirits were not dampened.

What a fantastic parkrun!  It was organised, efficient and friendly.  We had visited Volksgarten the day before to find the start and the course route.  We have done a few parkruns abroad and usually find that the route map on the website bears no resemblance to the actual route, however the directions and course map at Volksgarten were perfect!

When we arrived at about 8.30am the cones marking the route were already set out, so even without a visit the previous day we could just have followed them to find the start.

There were tourists from London, Chadderton Hall, Ireland, Ludwigsburg and Leamington, but the unofficial prize for the furthest travelled tourist went to the lady whose home run is Crissy Field, San Fransisco (wow!).

After briefings in English and German, the run started promptly.  The route was interesting and took in several features of the park including along the bank of the Düssel, round the lake, and past (or through!) several interesting sculptures.  The route is two identical laps and was well marked by an abundance of cones, although we were told that some previous parkrunners have gone the wrong way on the second lap by getting distracted and following a random runner rather than a parkrunner!

We all love a few parkrun stats so here are a few from today’s run.  This was run number 16 and had 26 parkrunners.  4 people were running their first ever parkrun and a further 15 did their first Volksgarten parkrun. 5 clubs were represented.  4 people achieved a PB – Congratulations all around!

Most importantly, there were 6 fantastic volunteers so a massive thanks as parkrun would not be possible without them. The volunteers were enthusiastic, friendly and welcoming - We really enjoyed meeting you and running your parkrun.

Thank you and hope to see you again!

Full results and a complete event history can be found on the Volksgarten parkrun Results Page.

Volksgarten parkrun started on 4th May 2019. Since then 190 participants have completed 341 parkruns covering a total distance of 1,705 km, including 53 new Personal Bests. A total of 40 individuals have volunteered 121 times.

It was a breezy Saturday morning in Düsseldorf, which made it feel a little bit chilly. However, as soon as we all lined up at the start, the wind stopped completely and you could really feel the warmth of the sun. Another beautiful bright morning with blue skies and white clouds in the Volksgarten!

There were 27 runners this time, including 15 first timers. There were visitors from many parts of England and Scotland, and some of them were wearing their home parkrun t-shirts. I saw Frimley Lodge, Southampton, and Hazlehead (an area to the west of Aberdeen in Scotland). There was another visitor wearing a Lfc shirt and the results suggest that this might have been Craig O'Brien! We also had two runners wearing Porthcawl Runners, which according to Google is a place in Wales! Another first timer let it be known that it was her birthday. When I asked for her name, she said that she wanted to remain anonymous. Happy birthday, Anonymous!

Chris and Hannah Gray were visiting from The Hague and brought us the good news that parkrun is now looking into getting started in the Netherlands.

Well done to Ian Telford, Catherine Telford and Dieter Kramer who got new PBs today. Full results can be found at https://www.parkrun.com.de/volksgarten/results/latestresults/.

Overall, it was another fantastic parkrun in the Volksgarten. Thank you to all the volunteers that made it possible! 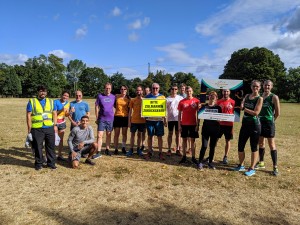 This week 26 people ran, jogged and walked the course of Volksgarten parkrun.  15 had been with us at before, and two were taking part in their very first parkrun.  Welcome, and welcome back!

In addition to our growing group of regular participants, we always appreciate visitors - Today we had four from far away Australia, return visits from the Netherlands and Scotland, and our first (we think!) tourist from Ireland: Fanchea, who also kindly volunteered.

The weather was milder for Event #14 than it has been, and 9 people recorded new Personal Bests.  Congratulations to Miguel, Dieter, Sebastian, Catherine, Alex, Chris, Peter, Ian and John!  Full results can be found at https://www.parkrun.com.de/volksgarten/results/latestresults/

The event this week was made possible by 7 amazing volunteers:

Volunteering is easy, fun and we support you with anything you need to know.  Please get in touch at volksgarten@parkrun.com to learn more and get involved. 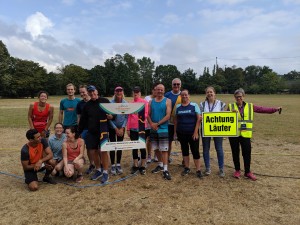 Volksgarten parkrun started on 4th May 2019. Since then 156 participants have completed 288 parkruns covering a total distance of 1,440 km, including 46 new Personal Bests. A total of 33 individuals have volunteered 104 times.